It’s interesting to me that I get noticed as being Chinese much more in Yaoundé than in the US. Well, maybe it’s really just that people here in Cameroon will point out the observation while in the US people won’t say anything. I will from time to time hear someone yell “Nihao” or “Chinois!” (Chinese person!) out of a car window, or as I walk by.

(As an aside, I suppose it’s no different than hearing “Les Blanc” (white person) on the street.)

I had a funny encounter the the other day, as I was buying a sandwich in a little shop by the side of the road. Two Cameroonians walked in while I was waiting and one said (the conversation was originally in French), “Oh, Nihao”. I said, “Well, I am American”. This didn’t compute initially so the friend said, “He said he’s American”. Then the first person said, “Oh, well you have a Chinese face”.

I guess I have a Chinese face.

I (Shannon) just returned from my second village trip to work with the same community on nouns.  Just as French, Italian and Spanish have some similarities as they are related languages, this language also has similarities with related languages.  This is extremely helpful in having an idea of how the grammar of the language might work.  However, even closely related languages are not the same and sometimes there are interesting surprises and variations in the way each language is structured and used.

Participants in the Noun Workshop Part 2

During this workshop, the community make big steps forward in understanding and using their new orthography (alphabet).  They are helping and correcting each other in their writing and seem to fully understand why and how to use the various letters, which are very different from the French system that they have been used to.  They also made  a preliminary decision on the marking of tones.  This language uses tones to distinguish meaning and also for various grammatical functions (ex. a mark of association, like a tree in the forest is denoted only by a high tone), so it is an important part of the language and of the writing system.  Our data at this point shows a fairly even distribution of the high vs low tone across all parts of the language and the community seemed to favor marking the low tone.  Up to this point, we’ve been marking all tones and this step of marking only one tone will help to simplify the writing and reading for the future.

Working on minimal pairs with vowel length and tone

In addition, the noun phrase system was explored and much data gathered for further analysis.  At the end of the week, the participants made charts summarizing all of the information that was gathered about their noun system and the way in which nouns work in their language.  It was good review for everyone and they corrected a few errors which shows that they are really understanding it now.

One part of the noun phrase summary chart

After finalizing the alphabet chart, groups worked on making sentences for each letter which can be made into a primer for literacy classes in the future.  We were also able to collect a few fairytales and many proverbs from the older men in the community.  They were eager to share and this information is extremely helpful in making sure that future translation works are clear, natural, and accurate.

Creating sentences for each letter of the alpahbet

With the arrival of the new R66 helicopter here in Cameroon, there have been reasons to celebrate.  And over Easter weekend, there was a celebration at the aviation hangar with a BBQ, a presentation and dedication of the helicopter, and of course, helicopter rides.

Brian, Eila, Josiah, and Thaddeus went on the ride.  Shannon stayed on the ground, like she prefers.

Here we are just after our ride.

The helicopter ride gave us a chance to see Yaoundé from the air.  It’s a big, sprawling city.  Unfortunately the air was very hazy while we were flying, so visibility was poor, but we could see much of the city right below us.

Yaoundé stretching off to the horizon.

Brian also assisted with the BBQ portion of the event, which involved an entire pig and an entire sheep.  They were slowly roasted overnight underground wrapped in banana leaves and foil.  Another one of the dads here orchestrated the whole pig roast.  It was fun to be able to help out.

It was a memorable day.

We hope you had a happy Easter celebration.

We just want to send a very quick update and give thanks to you for your prayers and to God for His great power!

Shannon has been pain free for almost two weeks now. She experienced immediate relief and full healing as a small group prayed over her. Praise God.

Schedules returned to normal this week after spring break. Also, Shannon is away this week at the village to continue with the next linguistics workshop with the same language community. 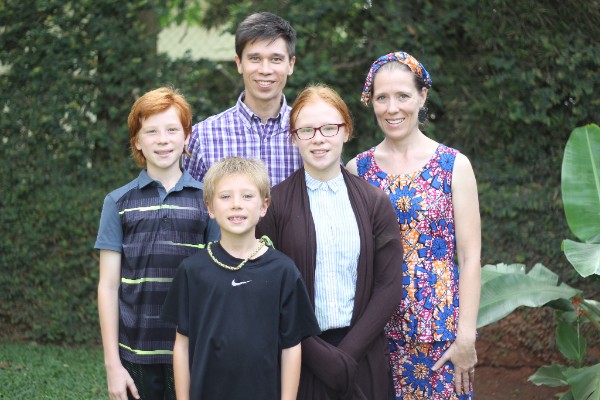 Our Easter family portrait for 2018.

Please pray for Shannon’s workshop in the village this week to go well and also for continued good health for the whole family. 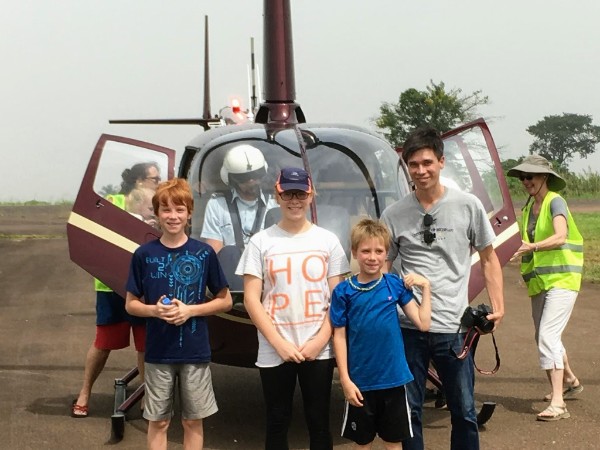 We were able to take a ride in the new R66 helicopter. It was a great experience.

Although we are members of Wycliffe Bible Translators, working with SIL International in Cameroon, our comments on this blog are our own and do not necessarily reflect the perspective of either organization.